Beerschot played one of their better games of the season this afternoon but again failed to score from a handful of chances. An old sore that led to the ninth defeat of a frustrating and luckless season. Our Mannekes missed killer instinct in the box, especially after the break when Noubissi missed two golden opportunities to break the deadlock. In the end a goal from Mrabti on the half hour proved enough for KV Mechelen to claim victory.

In a fifty/fifty first half the visitors combined better and Beerschot reacted well under pressure. KV Mechelen threatened with a belter from Gouet but Vanhamel saved. At the other end Soumaré tried his luck but his shot went just over the bar and the vistors were lucky when Walsh saw his back pass hit the post.

Only a couple of minutes later Mechelen scored when our defense was outplayed by a simple double pass: Cuypers sent Mrabti on his way who slotted home. What a cold shower for Beerschot who had to go in pursuit once again. A diligent Shankland worked tiredlessly and tried his best while Holzhauser curled a free kick over the wall but Coucke saved brillianlty.

Coach Javier Torrente brought on Marius Noubissi after the break who started dramatically when he missed the easiest of tap ins from a cross from Krekovic and later lost the ball which almost led to a second Mechelen goal. It was the start however of a strong second half in which Beerschot took control of the game, pushed the visitors back and impressed with good combinations over the wings. The Mechelen defense was all over the place but eventually survived under that pressure.

On the break Storm and Druijf came close to scoring a second but Vanhamel produced some good saves to leave Beerschot hoping for that well deserved equaliser and maybe even more. But when Noubissi missed another sitter when a shot from Shankland came back from the post and Vaca's shot went high in the stand it again ended in tears and frustration. For the ninth time already this season. 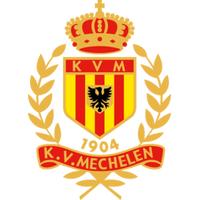