With Beerschot starting the 2020-2021 season in the First Division, we look back at our club’s history and turn the spotlight on a corresponding fixture from yesteryear…

Playing Club Brugge off the field, producing classy football, scoring with eyes wide shut and eventually winning 4-0, it doesn’t happen every season. But that’s what Beerschot did almost 14 years ago. The Olympic Stadium erupted and our players were cheered and applauded off the field after the final whistle.

Okay, Club Brugge were having a difficult season and it took half an hour before the game became a classic. But from then on there was no way stopping our Mannekes. In midfield Gustavo Colman and Hernan Losada were top. Coach Marc Brys didn’t find a place in the starting XI for his captain Daniel Cruz, who only came on as a late substitute. And up front both François Sterchele and Jurgen Cavens were unstoppable.

Sterchele, who was crowned topscorer in the first division with 21 goals that season, scored the first two goals but the real star on the night was Jurgen Cavens. He played a blinder: good infiltrations through the middle, technical highlights, brilliant double passes, making and scoring goals. Beerschot’s second goal for instance: Sterchele ran on the edge of the box, passed to Cavens who cleverly played the ball through - beating the whole Brugge-defense – where Sterchele put it in the net. A brilliant goal. Also defender Didier Dheedene scored, with a firm header. And it was Jurgen Cavens who put the icing on the cake in the final minutes, converting a pass from Sterchele. What a brilliant duo they were on the night.

Beerschot gave away just one scoring opportunity in the whole 90 minutes, but Balan’s shot was saved by Luciano. It was a glorious evening where everything went right; a perfect performance. One we hope can be repeated this Sunday night.

Man of the Match Jurgen Cavens was considered a “Lierse Boy”, but his period at Beerschot wasn’t too bad either. He played 71 games from 2004 to 2007, scoring 17 goals, won the Belgian FA Cup in 2005… and returned as a 36 year old when he helped KFCO Beerschot Wilrijk in their impressive run from amateur football back to the top. Despite the fact he also played for Standard Liège, Olympique Marseille, FC Twente and AA Gent, Cavens always told and tells journalists in interviews his spells at Beerschot stand out in his career. And that’s something we love to hear. 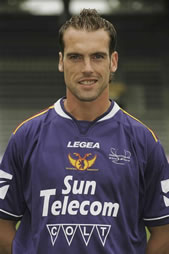